The Next Generation of Anti-Corrosion Coatings Platform:
– Free of Toxic Heavy-Metals,
– Much-Longer-Lasting,
– Much-Easier-To-Use

AnCatt Rust-Legend coating consists of a unique conducting polymer nano dispersion (CPND) based primer, a top layer and an optional inter layer. The polymer envelops the surface of metal and transforms the top layer into a thin but dense metal oxide layer. This system functions as an unique and effective barrier that protects metals from corrosion without using any current heavy-metal anti-corrosion pigment such as chromate, lead, or zinc. AnCatt coating technology significantly out performs current anti-corrosion coating products on the market by 3-6 times in corrosion durability, while also been the first ever heavy-metal free (green) high-performance anti-corrosion paint that can pass a standard high-performance corrosion test.  AnCatt Rust-Legend anti-corrosion paint is the exciting next-generation anti-corrosion coating platform for all metal surface corrosion preventions.

Current Anti-Corrosion Technologies and their disadvantages

Our accelerated corrosion tests were conducted by the well known U.S.-based third party independent corrosion test laboratory KTA. The top row of comparison photos are the front of the steel (crs) panels coated with AnCatt CPND coating; the bottom row is the back side of the panels coated with acrylic coatings by KTA. 5,000 hrs is the maximum test hour according to salt fog test (ASTM B 117) international standard. When 5,000 hrs of testing was reached, AnCatt’s coating was still intact, which has been recognized by the industry experts as the best result ever been seen. After 8,372 hrs of testing, the coating still can provide excellent pull-off adhesion and perfect tape adhesion results. Notice that the coating sealed itself from further rust expansion at the scribe lines. We waited until 13,000 hrs and amazingly, the rusting and blistering remained at a perfect score of 10. Please visit the corrosion test page or the full lab report for more details. 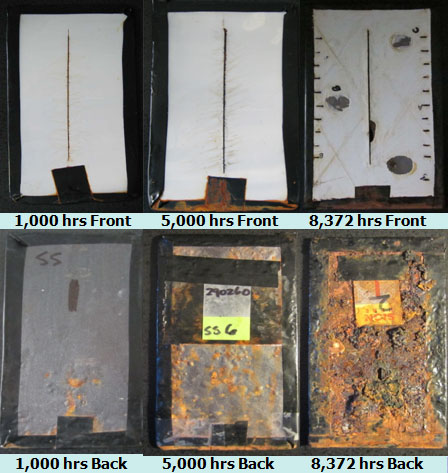 Our primer serves as an excellent heavy-metal free replacement for existing heavy-metal based coatings with even stronger anti-corrosion abilities. Our current formulation is vinyl wash primers and epoxy primers. Other products are still underway. We also have a low VOC and a water-borne anti-corrosion system.

Worldwide, trillions of dollars are lost to corrosion annually. In fact recent studies estimate the direct cost of corrosion in the United States to be nearly $300 billion dollars per year.

Hexavalent Chromate is a well-known carcinogen and is highly toxic to the environment. Government regulations are tightening on its usage world wide. The toxic effect became very well-known through the 2000 Hollywood blockbuster Erin Brockovich (starring Julia Roberts). This now-classic film depicted a real-life case of drinking water contaminated with hexavalent chromate that resulted in the largest legal settlement in U.S. history.

Due to their superior anti-corrosion abilities, primers containing chromate are still being produced by most major paint companies, since their performance has not yet met by other material. Currently, the environmentally compliant market standard of zinc/zinc oxides cannot protect light-metals such as aluminum and galvanized steel, and they are less effective in severe corrosive environments. Furthermore, the price of zinc has skyrocketed in the past couple years, and at current usage levels, zinc reserves are facing complete depletion around the year 2027.

Corrosion costs trillions of dollars worldwide — roughly 3-4% of a country’s GDP. Based on a Federal Highway Administration two-year study on U.S. corrosion cost published in 2002, the 2001 U.S. direct corrosion cost was estimated at $276 billion, and the indirect cost was estimated at about the same amount. Organic coating, the most widely used corrosion protection method, accounts for 88.3% of total direct corrosion protection method costs, and was a $106 market in the U.S. alone in 2001. Read more on U.S. corrosion impact, cost and development.

Metal lifted up humanity from bronze age to iron age, and even intensify in the modern age, from building construction to bridges, highways, automotive, aviation, shipping, pipelines, machineries. Therefore, metal corrosion or the aging and death of metal is one of the largest costs of our economy if it is not the largest cost driver. However, metal corrosion has been believed to be an unstoppable natural force, the only way to fight back is continuous repainting and replacing which is very expensive to the economy and to the environment. In addition, current technologies using toxic heavy-metals to combat the unstoppable and very expensive metals corrosion, higher the toxicity, better the anti-corrosion performance, with carcinogenic chromates been the most effective.

AnCatt anti-corrosion coating technology historical breakthrough can put the unstoppable natural force of corrosion to an unprecedented halt and yet without using any toxic heavy-metals, will bring humanity to a brand-new age of unprecedented sustainability, resources, and possibility. Therefore, AnCatt anti-corrosion coating technology breakthrough can solve some of the greatest problems that are facing the humanity today: global warming, infrastructure budget crisis, waste, diminishing of natural resources, and environmental contamination, especially heavy-metal contamination from the metal coatings. AnCatt technology can release enormous amount of resources currently wasted in the never-ending corrosion battle to improve quality of living and bring world peace, including on the metal surfaces.

The last Verrazano Narrow’s bridge repainting project budgeted at a quarter billion. If the paint can last six-times longer the direct repainting saving will be $4.5 billion for the next 60 years, if I only count 3.2% interest and not counting growth rate. Or one-million-dollar worth of our paint can save $180 million in direct bridge repainting cost. The indirect repainting costs such as painting bridge caused traffic congestions is ten times (10X) the cost of painting bridges itself.

Sure, huge saving will lead to huge carbon reduction, but more important it includes the two most intensive man-made source of CO2 emissions: steel production and cement production that produce 3.5 and 2 gig ton CO2 emission a year. 40% of steel produced a year is used to replace corroded steel that produces 1.4 (3.5*.4)) gig ton CO2 emission a year. If the paint can make the steel lasts six-times longer that will reduce about .5 gig tone CO2 emission a year which is enough to stop global warming. In addition, 90% of concrete failures were because of the corrosion of rebar inside, cement is the main ingredient of concrete.

Using AnCatt heavy-metal free paint can also reduce the environmental mitigation costs associated with heavy-metals used in anti-corrosion paint contaminating water and soil during paint application, maintenance, and after life.  Hexavalent chromate is the No. 1 toxic enemy of the military and aviation industry.  Lead already caused the Flint lead water crisis. Environmentally compliant Zinc is account for over 85% of the market, but it is still a marine pollutant and it is not effective with limited performance life.

AnCatt next generation anti-corrosion paint provide excellent adhesion to metal surface using a unique chemical bonding, not current physical bonding therefore could effectively prevent corrosion while avoiding the expensive and toxic surface preparation process to enlarge the surface area in order to enhance the physical bonding between paint and metal surface. AnCatt technology eliminated the expensive surface preparation could cut the repainting time, cost, and pollution by nearly half.

AnCatt paint is much thinner and without using any heavy-metals, therefore make coating much lighter that could help reduce infrastructure weight and save energy needed to propel a protected metal structures such as a ship.

AnCatt paint can protect all kinds of metals therefore reduces the number of paints have to maintain to protect different metals.

Since AnCatt Rust Legend Anti-Corrosion Paint is much easier to use without the expensive and toxic special surface preparation and the paint itself if toxic free, therefore, will open up the high-end anti-corrosion coatings to the consumer market the first time without special application training and certifications.

Join our mailing list today and get more information about AnCatt's anti-corrosion products and solutions. Simply fill out the web form.

The Best Anti-Corrosion Paint Ever Developed